Is it possible to be healthy in a sick society? by Aimee Cavenecia

Is it possible to have integrity while working for a corporation that lacks it? 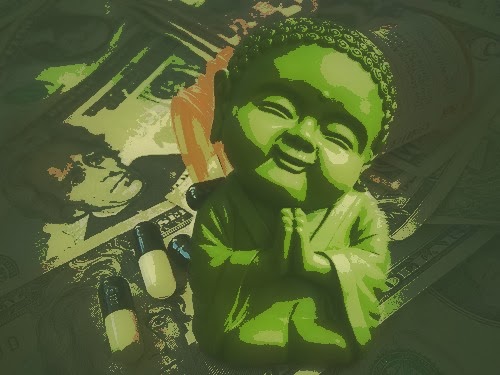 I was sick this week. My closest friends where shocked: "What you? Sick? I never see you sick." Well, I was. And I still am. The good news is, I was forced to cancel work and all appointments, and stay home. While at home, I decided to learn how to loom bead. I had a small wooden loom that I had yet to try. I literally had to pull it out of its box, unwrap it and read the directions. I felt intimidated. Trying something new always feels a bit scary. But after an hour or so, I said to myself, "Wow. This feels just like meditation! I love this. It's so centering and peaceful."

The forced slowing down of my overly active schedule (and brain) allowed me to realize what an opportunity my current state was. If I were to be home getting well, instead of racing about as usual, I could catch up on things I rarely get a chance to do. For three days I was able to enjoy so much. Just sitting in one spot, quietly beading and listening, and a little reading.

In the next few blog posts, I'll share what I listened to over those three days. But for today, I'll share one thing that I read.

This is an except from Evolving Dharma: Meditation, Buddhism, and the Next Generation of Enlightenment, by Jay Michaelson:

"I asked this of Jon Kabat-Zinn on the last night of the conference. I mentioned David Loy’s open letter entitled “Can Mindfulness Change a Corporation?” written to a board member of Goldman Sachs, and arguing that a Buddhist couldn’t serve in good conscience on the boards of corporations that have been involved in unethical business practices. It was a pointed and well-stated challenge.

So I was curious what Kabat-Zinn, who has consulted with numerous corporations and had just given a talk about mindfulness in business, had to say. Although he hadn’t read the letter, his answer was surprisingly similar to Loy’s. “This whole issue of ethics is really important,” he said:

"It’s not like Goldman Sachs can just do a little mindfulness and then be driven by greed, hatred, and delusion all the more. That’s not mindfulness. This is about restructuring things so that your business is aligned with the deepest domains of integrity and morality. You can make money in the service of creation of wealth, but not lying, cheating, and stealing, or cutting every corner."

Then he made a further point:

"I did some mindfulness work with a major Boston law firm back in the day, and people ate it up—and then a whole bunch of them left. We have to be prepared for that…. These people were being given annual bonuses called ‘no-life bonuses’ because you had to work so many hours that you never saw your family.”

So wait a minute. Meditation is being brought into the corporate world because it improves well-being and productivity–but then it causes people to leave. Who’s gaming who here? I was reminded of something Krishnamurti said, “It is no measure of health to be well-adjusted to a profoundly sick society.” Sometimes the unavoidable fact may be that our lives need to be adjusted to the dharma—if what we’re after is deep change. And often, seekers (including this one) actually integrate too fast, moving too quickly from low-level spiritual states back into the conventional world, without adequately deepening the stages and insights they bring about. Sometimes, we use the rhetoric of “integration” to have our spiritual cake and eat it, too."

What the author shared is something I experienced too, and something that I am still working with. I stopped being a professional artist with corporate clients (like high-end art foundations, retail franchises, ad agencies, etc.) because I could ethically no longer do it. I could no longer support a paradigm that I felt was outdated and blind. I literally felt like I was working for big dinosaurs that were manipulating and muscling their way through life, and would one day be extinct because of it. I felt like the longer I served the 'bottom line is king' agenda, the longer that type of thinking would be the standard. This was over 5 years ago, and although these corporations still run the show, the emperor is gradually being seen without clothes. People are beginning to wake up to the co-created sick reality.

I did make changes in my work, and I'm still finding my way regarding work (it's not easy to bite the hand that feeds you, unless you have your own thriving garden set up first!) But living in the city, a city like New York City, you can't help but get swept away in the frenzy. My days get filled to the brim, because that is what we do here. One tiny New York minute is probably one whole hour in the country -- things happen fast! I feel like every time I write someone (family & friends), I am rambling on about how overwhelmed I am with what I have going on. Why is this? I'm like a broken record. Every email seems like it says "I had a crazy week this week!" Do you feel like this too? Are you jammed packed busy until you are forced to slow down?

This is why meditation, mindfulness and spiritual matters (not religious matters, totally different) can be so challenging for most. It's very difficult for the average person (especially living in a big city) to slow down. To sit still, surrender, and just be. Or even to be fully centered in what they are doing. Like using the current activity as a mindful practice, or a way to be fully present.

When things are ready to happen, they happen. When things need to change, they change. Sometimes we find ourselves home sick, or we suddenly find that we can no longer do what we were doing. We are forced to wake up. But we are not isolated individuals living in separate bubbles. We are completely dependent and interconnected. The sun, stars, sea, animals, insects, people, trees, wind -- all work in harmony. If a large enough group is sick, everyone is sick. Right now, people are not living well, despite what many of them think. They are overstressed, and preoccupied with money or superficial things. As a result, the planet is sick. Things are crazy. The planet is trying to find balance, and so are we. Which came first, the chicken or the egg? Regardless of whether or not we threw the planet off balance with our actions, we all have to clean up the mess. That's what families do. Consider the entire universe, everything that is a part of it, your immediate family. Did you forget that is was? It has been all along.

Like I tell most of the people I work with, it all starts with awareness. If you know you have a problem, it's less of a problem. If you have no idea you have a problem, it's a HUGE problem. I'm fully aware that major changes need to happen in my life, and in the world. I am fully aware that this will take heart. It's not a matter of money, it's a matter of courage and clarity. And the change in the world begins with me. How could it not, when I am an integral part of it? We all are. It's time we stop selling ourselves (or things that make up the planet, and universe) short. Life isn't for sale. And if it is, it might be time we finally took it off the market. And if we won't, maybe nature will. Regardless, we are in this together.

Aimee Cavenecia (also known as AimeeLovesYou) is an author & activist who is currently igniting a Bliss & Self-Mastery revolution through her weekly blog Sunday Is For Lovers. Aimee's life-work is to share her insights on Seeing, Loving & Being (SLB), as well teaching meditation to people globally via the internet.
Posted by CDJ Guest Editor at 08:00