I have a thing for singer-songwriters, and lately I've rediscovered my love of crayons (which as a kid, I used to call "crowns"). The other day, these two loves came together when Dan Wilson, who's an artist as well as a songwriter, posted a drawing he made of the names of artists who have influenced him.

Inspired, I got out my crayons and made this list of my creative influences. 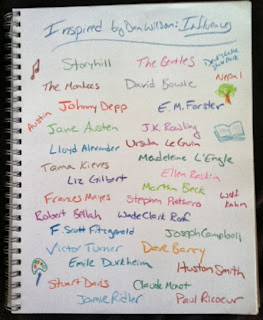 Here they are in categories:

I could go on with friends, family, teachers, and organizations that influenced me, but this is the list of people I was drawn to specifically because of their creative work or their creative way of being in the world. But I couldn't resist also including some places that have been important to my creative life:

Who are the influences that you've chosen?

Kelly Besecke writes about spiritual meaning, progressive religion, and authentic living. Her first book, You Can't Put God in a Box: Thoughtful Spirituality in a Rational Age, will be out November 1. Kelly is a dreamer, a thinker, and an incurable idealist who loves singer-songwriter music, impressionism, and every dog she's ever met.
Posted by CDJ Guest Editor at 02:00